A foreign national was captured over the weekend, Saturday, June 5th, after reportedly driving a sedan before allegedly recklessly bumping into and then dragging two vehicles for 800 meters in a road rage incident in the Banglamung district, according to Banglamung police.

Banglamung police officers arrived at the scene in the early evening on June 5th after being alerted of the road accident on Banglamung 25 Road near Rong Po market that involved one foreigner and several vehicles of local residents in the area.

A black sedan with a Prachinburi license was found in the middle of the road with a black motorcycle nearby. Both vehicles were facing towards the Rong Po market, wrecked and severely damaged.

The foreigner, around 50 years old, whose nationality was unknown and name was withheld by police pending a further investigation, was spotted injured and lying on a footpath nearby, having been detained by police and residents. He was reportedly the driver of the black sedan that caused several damages to villagers’ vehicles. 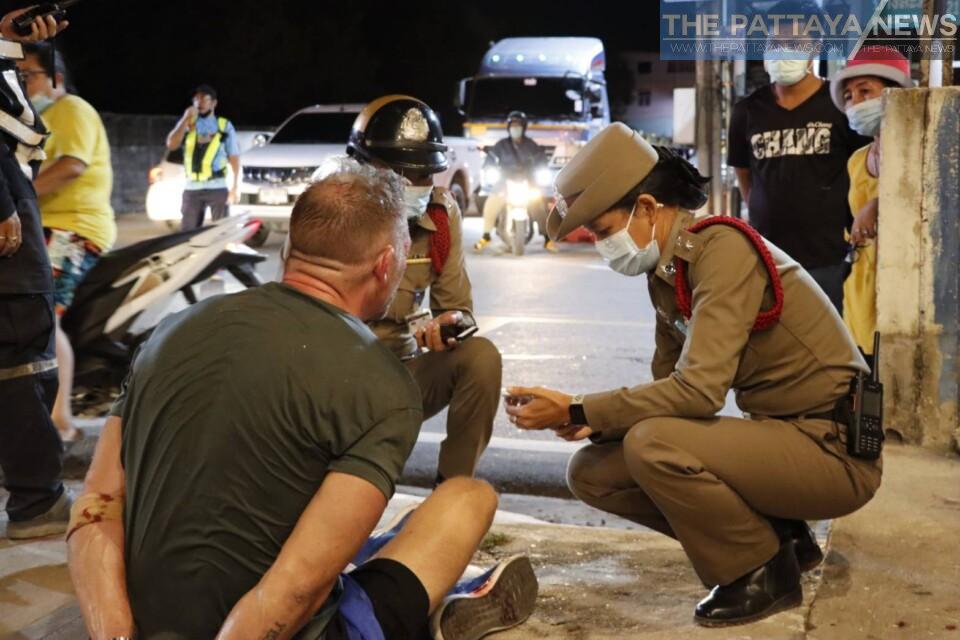 According to a local witness, a loud noise of solid cracking and dragging on the road was heard in the neighborhood before the witness rushed out to the street to see what happened. A group of local drivers was seen chasing the foreigner driving the black sedan which was reportedly dragging the black damaged motorcycle from the railway to the front of Lan Nua restaurant, estimated to be more than 800 meters. Multiple Thai residents managed to block the path of the foreigner and get him to stop his vehicle.

The foreign motorist then got out of the car, reportedly attempting to flee the scene on foot. A large group of Thai villagers then began to follow and eventually catch him, physically restraining the foreign national until the Banglamung police arrived. However, there was reportedly a commotion and physical dispute during the catch, causing the foreigner to be injured in the incident. The foreigner was bleeding heavily from several facial wounds following the altercation. During the police investigation, a black pickup truck was also spotted at the scene with damage to the back from being reportedly hit by the foreign national driving the black sedan. The owner of the damaged black motorcycle, whose name was withheld pending the ongoing investigation, told the Banglamung police that she was parking the vehicle at the side of the road and left with her daughter for shopping when the foreigner reportedly crashed into her motorbike and dragged it for over 800 meters. Both of them were not injured from the shocking incident, the motorcyclist stated. She and her daughter screamed for help, which caused local residents to chase after the foreign driver.

Initially, the injured foreign motorist was taken to a nearby hospital for treatment with a police escort while Police Lieutenant Colonel Kamolporn Nadee, a deputy inspector from the Bang Lamung police station, took pictures and collected evidence at the scene as a part of the investigation. Nearby CCTV footage would also be inspected in order to charge the reckless driver for legal proceedings. Lt. Col. Kamolporn stated “multiple charges” would likely be placed against the foreign national.

The foreign motorist did not give a statement to the press and it was unknown if he had an attorney.